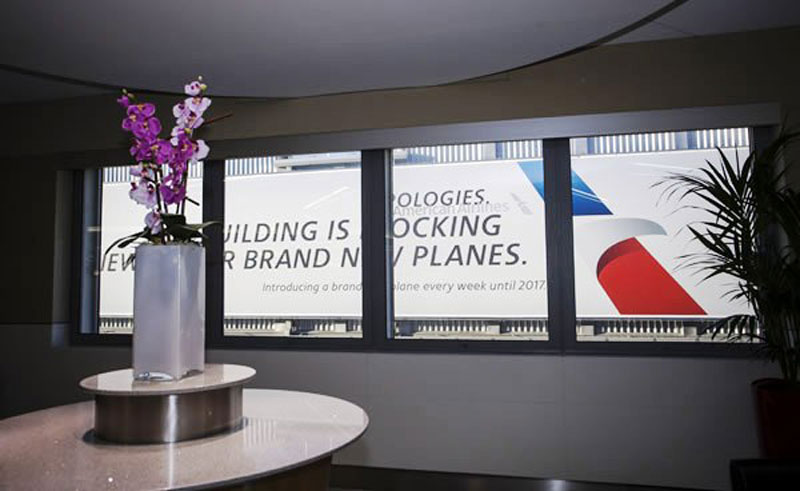 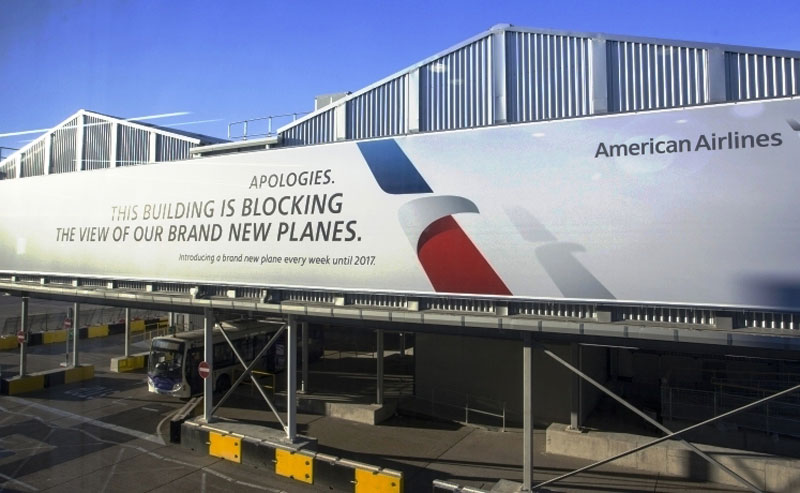 THE DEVELOPMENT Heathrow Airport is the busiest airport in Europe, carrying over 73 million passengers every year as part of the busiest city airport system in the world in London. Terminal 3 alone handled around 17 million passengers in 2014 across more than 82,000 flights. LHR Airports Limited continually invests in the development of the airport to improve the travel experience for all of its visitors. As part of these enhancements there was a need to build a temporary flight connection centre whilst works were being carried out on the new connection centre.

THE BRIEF As the temporary connection centre obscured the view of the planes from American Airlines® flagship Admirals Club® lounge they worked together with Heathrow Airport and challenged JCDecaux to solve the problem. JCDecaux are the UK’s leading outdoor advertising company and are responsible for all of the external advertising displays at Heathrow. The brief was to create a giant billboard that would be seen from the lounge, hiding the temporary structure from the eye-line and creating the perfect advertising opportunity for American Airlines® to promote their new fleet of aircraft.

THE SOLUTION JCDecaux appointed Embrace to deliver the specialist frame and banner. Working successfully with all of the accreditations and training certification in place our installation team were able to work around the demanding compliance and security requirements at the airport.

We were able to install the frame and banner over seven consecutive nights, working within the strict access restrictions on site. The completed advertising banner was delivered ahead of schedule and is the largest at any UK airport – measuring over 180m2 – around three times larger than the biggest standard billboard size. Travellers cannot miss the American Airlines® commitment to delivering a brand new plane every week until 2017, turning the disruption into a positive brand touchpoint.