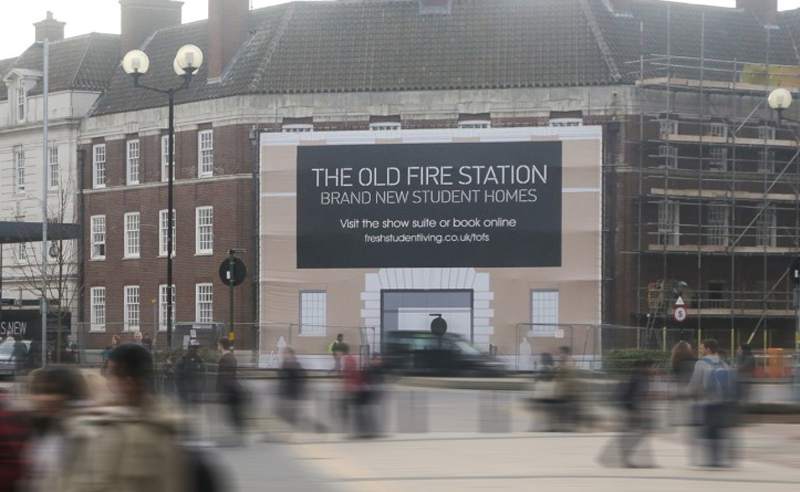 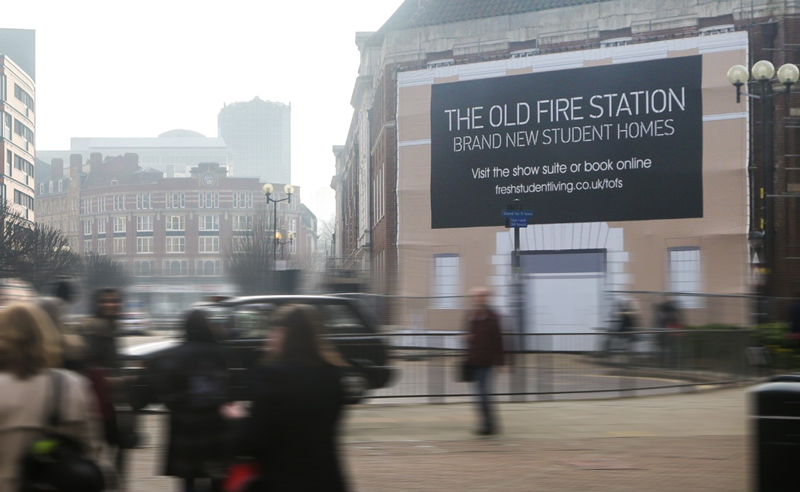 THE DEVELOPMENT Developer Watkin Jones planned to transform the 1930s historic fire station at Lancaster Circus in Birmingham into student accommodation, which will have space to sleep 463 students. The renovations will create a stunning new six floor tall block which will launch in September 2015 whilst maintaining the heritage of the building with many of the original features such as the fireman’s pole and drill tower remaining.

THE BRIEF The primary requirement was to disguise the unsightly scaffolding and works on the main front facia of the building. As with all building wraps and scaffold banners this then creates an excellent opportunity to not only disguise the works, but also present a one-to-one image of the completed building behind or promote the completed development. In this case we did all three and used this space to both display an impression of the completed building behind (which was important given a number of planning considerations around the finished development maintaining the spirit of the original area and building) as well as to promote the brand new student homes ready for their launch later in the year.

THE SOLUTION Embrace Building Wraps were able to deliver a cost-effective wrap solution that meets the requirements of the brief exactly. The façade banner facing Lancaster Circus not only is bright and visually appealing, but also clearly promotes the new accommodation, including the website details to generate enquiries. The building wrap has been designed and executed perfectly to raise awareness and interest in the new student accommodation with a high visibility, giant scale front elevation that, quite simply, would be impossible to miss.

The aesthetic of the area has been enhanced while the works are taking place and creating a real buzz of excitement around what lies behind. As you would expect with an Embrace Building Wrap project, the works were completed on time and to the guaranteed budget.