This week saw the installation of the final section of colourful printed scaffold banner covering the temporary scaffolding at the iconic Selfridges department store in Birmingham.

To give an idea of scale, the striking dogtooth design wrap measures almost 9,000 m2. This is 58% bigger than the currently recognised Guinness World Record holder for the largest scaffold banner which was installed in Madrid back in 2018 at a mere 5,672 m2.

Installation of the frames and digitally printed wrap which will disguise the works during renovations commenced on site at the end of December 2020. The banner features an artwork design produced by Birmingham-born designer Osman Yousefzada comprising of interlocking six metre diameter dog tooth flower designs in three contrasting colours.

In total the Embrace Building Wraps team have installed 5,888 linear metres of scaffold tubes in Birmingham for the banner frames, vertical curved shaping, and buffer rails. To put that into perspective, if laid end to end the scaffold tubes would extend around four miles (six kilometres). The weight of the printed wraps alone is just under five tonnes, more than three Mini Coopers.

Embrace seamlessly joined twenty four individual banners of which 85% had three or more adjoining perimeter edges that had to line up perfectly with the adjacent banners.

If you have ever tried lining up wallpaper then this is supersized to another level as the average dimensions of each individual banner are 388 m2. At the extremes, our wrap is 246 metres long & 37 metres high – equivalent to a giant wall of nineteen double-decker buses stacked eight high.

Our dynamic Operations Team had their work cut out for them and have really delivered on this industry-leading project which has been a fantastic team effort between ourselves, BAM Construction and the Midland Scaffolding Services Teams on site.

Discover more and take a look at an aerial video at our Selfridges Birmingham case study page. 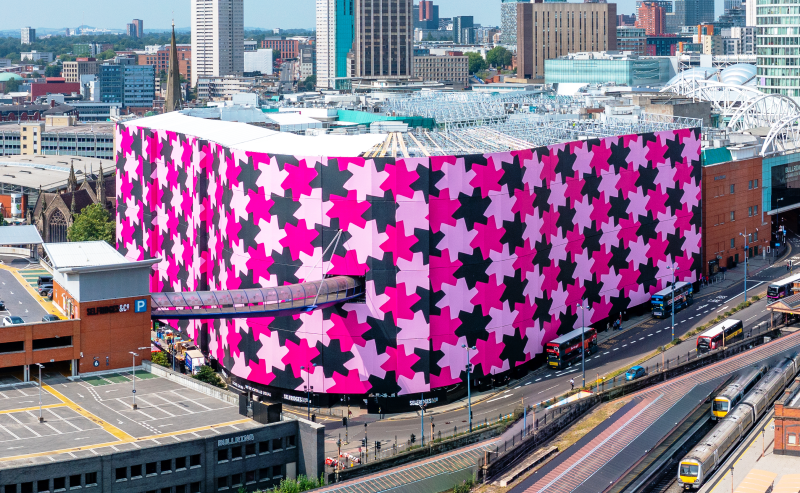